He's Close To The Kingdom 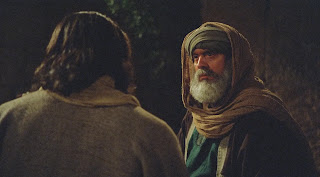 After reading Jeremiah 38 again, I can't see Nicodemus as a good guy anymore in this passage. But a coward, who was happy to come at night, but not happy to openly associate with Jesus. Now this does change, and we will get to that, but the striking similarity between what Nicodemus did and what Zedekiah did jumped out at me as I reading Jeremiah this week. We read in Jeremiah 38:

"14 King Zedekiah sent for Jeremiah the prophet and received him at the third entrance of the temple of the Lord. The king said to Jeremiah, “I will ask you a question; hide nothing from me.” 15 Jeremiah said to Zedekiah, “If I tell you, will you not surely put me to death? And if I give you counsel, you will not listen to me.” 16 Then King Zedekiah swore secretly to Jeremiah, “As the Lord lives, who made our souls, I will not put you to death or deliver you into the hand of these men who seek your life.”

17 Then Jeremiah said to Zedekiah, “Thus says the Lord, the God of hosts, the God of Israel: If you will surrender to the officials of the king of Babylon, then your life shall be spared, and this city shall not be burned with fire, and you and your house shall live. 18 But if you do not surrender to the officials of the king of Babylon, then this city shall be given into the hand of the Chaldeans, and they shall burn it with fire, and you shall not escape from their hand.” 19 King Zedekiah said to Jeremiah, “I am afraid of the Judeans who have deserted to the Chaldeans, lest I be handed over to them and they deal cruelly with me.” 20 Jeremiah said, “You shall not be given to them. Obey now the voice of the Lord in what I say to you, and it shall be well with you, and your life shall be spared."

It is striking that Zedekiah is his most open and his most inquisitive just before he is punished. Because in chapter 39 we see he ignored Jeremiah's command, gave in to his fear, hid what he spoke to Jeremiah about and then faces the punishment Jeremiah prophesied would happen. The man who refused to see the truth Jeremiah spoke and act on it, is forever blinded and cast into a Babylonian jail.

While not a king, Nicodemus is a ruler among his people, and we see John presents him initially in much the same way that Jeremiah presents Zedekiah in this passage: John 3:1-2 - "1 Now there was a man of the Pharisees named Nicodemus, a ruler of the Jews. 2 This man came to Jesus by night and said to him, “Rabbi, we know that you are a teacher come from God, for no one can do these signs that you do unless God is with him.”

Because of how Nicodemus turns out later in John 7 and especially John 19, it is common for people to read his encounter with Jesus in a positive light. But his coming to Jesus at night shows he was cowardly and afraid of doing the right thing. He is poised to become another Zedekiah figure. But he doesn't, he eventually changes sides and publicly comes and aids with the burial of the Lord Jesus, choosing to stand with the man condemned by the Jewish leaders:

John 19:38-42 - "38 After these things Joseph of Arimathea, who was a disciple of Jesus, but secretly for fear of the Jews, asked Pilate that he might take away the body of Jesus, and Pilate gave him permission. So he came and took away his body. 39 Nicodemus also, who earlier had come to Jesus by night, came bringing a mixture of myrrh and aloes, about seventy-five pounds in weight. 40 So they took the body of Jesus and bound it in linen cloths with the spices, as is the burial custom of the Jews. 41 Now in the place where he was crucified there was a garden, and in the garden a new tomb in which no one had yet been laid. 42 So because of the Jewish day of Preparation, since the tomb was close at hand, they laid Jesus there."

But the notable point is that Nicodemus was not yet a good guy. He would become St. Nicodemus eventually, but not until he publicly identified with Jesus. This is key for the believer, this public identification for Jesus. This should impact how we conduct ourselves and the people we seek to lift up as great leaders.

Christians are obsessed with the Nicodemus figures of the modern world, people that they see as "close to the kingdom" forgetting that Nicodemus was originally a Zedekiah figure, and he had a choice: choose fear and remain hidden and face judgement like Zedekiah. Or be bold and be willing to be accounted with the Lord Jesus despite the views of the Jews who hated him.

It is clear this fear overrode Zedekiah, "19 King Zedekiah said to Jeremiah, “I am afraid of the Judeans who have deserted to the Chaldeans, lest I be handed over to them and they deal cruelly with me.” And it is clear that Nicodemus was at first ruled by the same fear. It is not until he overcomes this fear that he becomes a man of note in the gospels.

For some people this is a process, this is a journey. But we should not be enamored with those who are publicly choosing the side of Zedekiah or John 3 Nicodemus, they are not close to the kingdom, they are choosing fear until they are not. We should be seeking to follow and emulate those who boldly stand with Jesus and accept the exclusion that comes with that.

"He's close to the kingdom" is a game that many play to deceive believers, and it works because Christians are desperate for any kind of mainstream approval in our Christian world. I think it is important that Nicodemus, as one who long gave in to fear, only plays a minor role in the gospels, which is in contrast to many who stood much more boldly and were commended by Jesus himself.

Just remember that Zedekiah's are as common, if not much more common, than the Nicodemus', and neither is a model of discipleship in the way that Peter, James, John and others were, who were willing to lose it all to be identified with Jesus. Nicodemus may have eventually become that, but that is because he learnt from the disciples, not the other way around.