Tithing: What Does The Bible Teach? 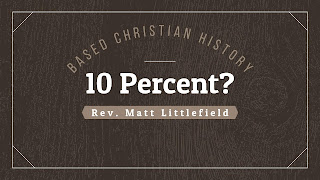 Ten Percent? Are Christians supposed to pay the tithe? So many teachers preach that not only do you need to pay the tithe, if you do not God will not bless you, and you may even live under a financial curse. But what does the Bible actually teach about the tithe? Well, let’s examine it.

Tithing In The Old Testament

First we need to clear up this whole misunderstanding that the Israelites were required to pay 10% of their income, or earnings and produce in a year. The picture is a more complicated than that, there was more than one tithe, and other commands about giving.

The first Tithe (Leviticus 27:30-33) - a Tithe, or tenth of everything the Israelites produced from their land or earned, was to be returned to the Lord, it was his. “30 “Every tithe of the land, whether of the seed of the land or of the fruit of the trees, is the Lord's; it is holy to the Lord. 31 If a man wishes to redeem some of his tithe, he shall add a fifth to it. 32 And every tithe of herds and flocks, every tenth animal of all that pass under the herdsman's staff, shall be holy to the Lord. 33 One shall not differentiate between good or bad, neither shall he make a substitute for it; and if he does substitute for it, then both it and the substitute shall be holy; it shall not be redeemed.”

The Levities were given the tithe for the work they did on the temple, and for overseeing the enacting the Levitical and Deuteronomic laws of the land.

People forget that the priests, with the judges and later with the kings, were responsible for making sure the law was obeyed and practiced. This means they were effectively civil servants, and to some degree police, they were meant to ensure the proper Levitical punishments and regulations were put into effect.

The Levites themselves then gave a tenth, of the tithe to the Lord, as an offering Numbers 18:25-26 – “25 And the Lord spoke to Moses, saying, 26 “Moreover, you shall speak and say to the Levites, ‘When you take from the people of Israel the tithe that I have given you from them for your inheritance, then you shall present a contribution from it to the Lord, a tithe of the tithe.”

The Levites also got all the free will offerings, everything that people devoted to the Lord, Numbers 18:14 - “14 Every devoted thing in Israel shall be yours. 15 Everything that opens the womb of all flesh, whether man or beast, which they offer to the Lord, shall be yours. Nevertheless, the firstborn of man you shall redeem, and the firstborn of unclean animals you shall redeem.” The prophet Samuel is himself an example of this. His mother, Hannah, dedicated him to the Lord, and he lived among the priests as a result.

The second Tithe (Deuteronomy 14:22-27) – The Israelites were also to pay a second tithe that went to a large festival every year, the festival of ingathering (Ex. 23:16), that they were to share with everyone. “22 “You shall tithe all the yield of your seed that comes from the field year by year. 23 And before the Lord your God, in the place that he will choose, to make his name dwell there, you shall eat the tithe of your grain, of your wine, and of your oil, and the firstborn of your herd and flock, that you may learn to fear the Lord your God always. 24 And if the way is too long for you, so that you are not able to carry the tithe, when the Lord your God blesses you, because the place is too far from you, which the Lord your God chooses, to set his name there, 25 then you shall turn it into money and bind up the money in your hand and go to the place that the Lord your God chooses 26 and spend the money for whatever you desire—oxen or sheep or wine or strong drink, whatever your appetite craves. And you shall eat there before the Lord your God and rejoice, you and your household. 27 And you shall not neglect the Levite who is within your towns, for he has no portion or inheritance with you.”

Now this tithe was not just for the Levites, but also for the poor foreigners living among them, the fatherless, and widows, aka, the needy (Deuteronomy 14:28-29). So, it paid the state’s workers, and was used for welfare to help the poor.

When you add to this a couple of other taxes that were in place specifically to help the provide for the poor (Lev 19:9-10; Exodus 23:10-11), we can see that from the founding of their nation, the ancient Israelites were required to pay more than 20% of their income in ‘tithes’.

Considering they were a theocratic state, and that the Priests were also effectively the civil government, this amounted to what we would consider income tax today. Which explains God’s anger in Malachi 3:6-12 – they were robbing the needy who had no other way to make an income other than through the tithe. (compare this to Jesus statements in Matthew 25 about what you do to the least of one of his people you do to him).

The third tithe - In fact, the amount they had to pay went up even more once they got a King, as Samuel tells them, 1 Samuel 8:11, 13-18 – “11…he will take your sons and appoint them to his chariots and to be his horsemen and to run before his chariots…13 He will take your daughters to be perfumers and cooks and bakers. 14 He will take the best of your fields and vineyards and olive orchards and give them to his servants. 15 He will take the tenth of your grain and of your vineyards and give it to his officers and to his servants. 16 He will take your male servants and female servants and the best of your young men and your donkeys, and put them to his work. 17 He will take the tenth of your flocks, and you shall be his slaves. 18 And in that day you will cry out because of your king, whom you have chosen for yourselves, but the Lord will not answer you in that day.”

God is telling them here what he will allow the king to take. If God says this is allowed, then it is legitimate, especially as it was decreed by the senior prophet of Israel, Samuel.

So once the Israelites got a King they were then liable for the equivalent of over 30% income tax. There is a lesson in this, the more you want government to do for you, the more you will pay for it. The Israelites demanded a king and because of this they lost their freedom and more of their money.

All other giving on top of this in Ancient Israel was voluntary – Exodus 25:1-2 - “25 The Lord said to Moses, 2 “Speak to the people of Israel, that they take for me a contribution. From every man whose heart moves him you shall receive the contribution for me.”

So, the question we should ask is, are these Mosaic/Levitical laws binding on Christians?

This in an excerpt from a sermon, listen to the full message here.