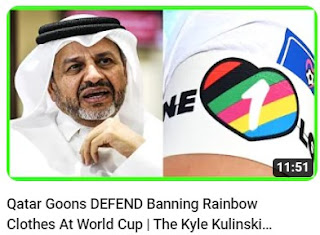 This is a very important video. Because in this video, one of the most radical egalitarians I know actually admits that equality is not workable, possible or reasonable.

Kyle is a passionate egalitarian atheist secularist, who is absolutely committed to egalitarianism in the West. Yet he has to admit its a non-workable philosophy.

You have to understand equality is an anti-Christian force. It was the rhetoric of the secularists for well over a century because it was useful to batter against the anti-egalitarian strictly hierarchical Christian faith. And it worked. It worked so well many Christians now preach as if equality was their idea.

But now that secularism reigns supreme in our culture egalitarianism is being redefined to suppress any competing philosophies, especially hierarchical religious philosophies. The goal was always the supremacy of the godless morality of the anti-Christ philosophy over Christendom and beyond. Now that the egalitarians are squarely in charge their rhetoric of equality is not as useful to them. They can now admit their desire for all competing ways of living to be diminished, if not suppressed.

Kyle's argument is now common amongst secular leftists: "of course all cultures are not equal. Only our egalitarianism philosophy is the right kind of equal and all else must submit to it."

Watch the video. It's a remarkable admission.

(Note: Kyle's language is often rough, I don't endorse him or his views, he is just illustrative of how the radical left thinks).