Palestine Is A Nation 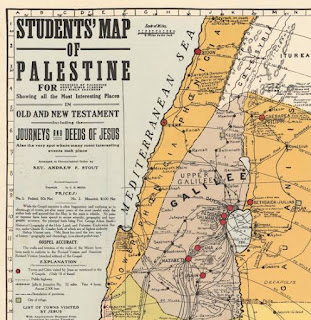 How does a nation form? It can look different in different cases. But a nation is a people, with a shared lineage, culture, mythos, and origin story. Much of history records the formation of new diverse nations. Sometimes powerful, sometimes weak, sometimes long lasting, sometimes we see them go extinct. In fact, much of the Bible is about the beginning, development, growth and decline of one specific nation; Israel. Where did Israel come from?

Abraham was a wandering Aramean, originally from Ur of the Chaldees. One of his sons was a Hebrew, another an Ishmaelite, and another a Midianite. All those born of Isaac's son Jacob are Hebrews or Israelites. They have a shared identity, born of one of the tribes of Israel, they have the same God, lineage, culture, origin story: born of a promise, and mythos, that is a shared understanding of their national story and identity. Their nation, did not exist 4 generations prior to Jacob but by the generation of the 12 sons of Jacob, they were a nation, that identified themselves strongly, and at times with force, against other nations ( for example Simeon and Levi). All nations have done the same at one point. Even we Aussies have been known to do this. Nations have a right to defend themselves.

No one would deny that Israel was a nation, even when they were a nation without a state, and wandered from place to place, dispersed all over the world. But some nations do not get afforded this same level of respect.

There are people who wrongly, but adamantly, say Palestine never existed as a nation. Many who say this know that Palestine is an ancient designation of the land of Canaan, that originates from the Greeks, and derives from Philistine. They also are aware that the Romans renamed the province of Judea, Syria Palaestina (Palestine) after another large rebellion of the Jews was defeated in 132 AD. Of course, those who recognize the Philistines as ancient invaders into the land of Israel, are not keen to ascribe the name Palestine to the land they consider to be the right of the Israelites. So, many who hold this view easily fall for the statement that Palestine was never a nation. But this is incorrect, for most of the A.D. era a people lived in the province of Palestine, first mostly Christian, then Christian and Arab Muslim, then mostly Muslim, but still many were and are Christian. They had survived different invasions, wars, shifts of Empire from Rome, to Byzantium, to Arab Muslim Empires, then a large Turkish Muslim empire. Many converted to Islam over time, some held onto their ancient Christian heritage. They built churches, some as ancient, almost, as Christianity itself, some built mosques, also very ancient.

There are also many texts which refer to the land of Palestine, as they would any other country. All you have to do is pick up a history book and you will see this is true, especially an older one. For example, Schaff’s A History of the Christian Church, volume 5 first published in 1911, says this:

Other circumstances gave additional impulse to the movement, such as the hope of securing relics of which Palestine and Constantinople were the chief storehouses; and the opportunity of starting a profitable trade in silk, paper, spices, and other products of the East. These pilgrimages were not seriously interrupted by the Mohammedans after their conquest of Jerusalem by Omar in 637, until Syria and Palestine passed into the hands of the sultans of Egypt three centuries later. Under Hakim, 1010, a fierce persecution broke out against the Christian residents of Palestine and the pilgrims.[1]

No one would ever be taken seriously who said that Syria never existed, at least not by anyone credible. Yet here we have Syria and Palestine spoken of as real geographical places, alongside of Constantinople, places where people lived and breathed and had valuable relics. In fact Palestine is mentioned as being comparable to Constantinople in its storehouse of relics. For obvious reasons, both these places have played a central role in many centuries of Christian history. Many people are aware though that Palestine was a province of Rome, then the Eastern Roman Empire (Byzantium), and the various Islamic Empires. But it is wrong to say this means it was never a nation as well. After all, both Syrians and Palestinians were in a similar circumstance for centuries, and people of both places now tell us they are Syrians or Palestinians. The most important designation of nationhood is a self-asserted identity that is commonly held by a people. Hence Palestine is a nation, just as Syria is.

Here is another example: “Although these conquests were not directly related to each other, they were due – whether in England, Italy, Spain or Palestine – to the superiority of mounted knights when inspired by a militant clergy.”[2] If there are Englishmen, Italians, and Spaniards, why no Palestinians? In fact the people of that land viewed themselves as Palestinians, some may have identified with the greater Arab world more, others with perhaps the ancient Roman/Greek world. But they were a people who over time have come to identify with each other and their land, whether Christian or Muslim or otherwise they tell us they are Palestinians, therefore they are nation. Just as these other nations do as well.

Palestine and the holy wealth of Jerusalem were the next objects that attracted the ambition, or rather avarice, of Chosroes. Constantinople and the palace of the Caesars no longer appeared impregnable or remote; and his aspiring fancy already covered Asia Minor with the troops, and the Black Sea with the navies, of Persia.

Again we read in Gibbon[4],

But the firmest bulwark of Jerusalem was founded on the knights of the Hospital of St. John, and of the temple of Solomon, on the strange association of a monastic and military life, which fanaticism might suggest, but which policy must approve. The flower of the nobility of Europe aspired to wear the cross, and to profess the vows, of these respectable orders, their spirit and discipline were immortal; and the speedy donation of twenty-eight thousand farms, or manors, enabled them to support a regular force of cavalry and infantry for the defense of Palestine. 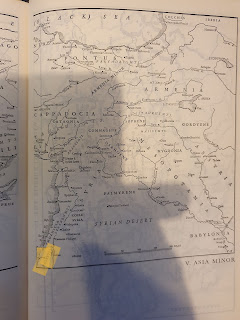 I saw one man once mock the idea of Palestine existing, by comparing it to Narnia, but Crusader Knights, whatever their faults, never sought to lay down their lives for a mythical realm, even one as noble as Narnia. However, for a real place, with real soil and real history, that they did most certainly.

Here is the last mention in the text of my annotated version of Gibbon’s empire; “Without delay the successor of Constantine instructed Palestine, France, and Rome, of this memorable revolution.”[6] Palestine is again and again mentioned alongside other ancient people’s and nations and cities. These references to Palestine in Gibbon are relevant over many centuries, and many more could be given. How many centuries must a name be used for a people, before they take it on as an aspect of their identity? Australia is a new nation founded mostly by British migration, yet we Aussies are not Brits, and we’ll assert that strongly.

Indeed, after World War 1 an official country of Palestine was created in the dividing up of the Ottoman Empire, evidenced by this map of Europe during World War two: 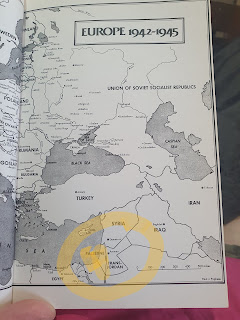 And in 1948 they were removed from sovereignty of their ancient land by a mighty Empire, in its final years of greateness, the Empire of Great Britain. Though the process began with the defeat of the Ottoman Empire in World War 1 by the British military and its auxiliary troops (famously some were Aussies).

The Palestinians identify with that series of events, and if the rest of history isn't enough for you, then without any doubt a nation was forged anew in 1948, that is as clear an origin story as you'll get; a nation that identifies with its displacement, and as having been conquered and removed from sovereignty in their own land. As the Palestinian Christian Kairos Statement says,

They call themselves Palestinians. This is true whether they are Christian or Muslim, and every nation has a right to self-determination. That should be enough to settle it for the rest of us.
Palestine has existed for longer than Australia, America and even Great Britain. To say that Palestinians were never a nation, they were just Arabs living in Palestine, is precisely the same as saying that Australians never existed, we are just Brits and Europeans living in the place called Australia, is clearly incorrect. Australians began to identify as their own people after having a shared identity here in Australia. Palestinians tells us they have done the same.

If such an ancient nation can be deleted from many people’s consciousness, do you think these more modern nations are secure?